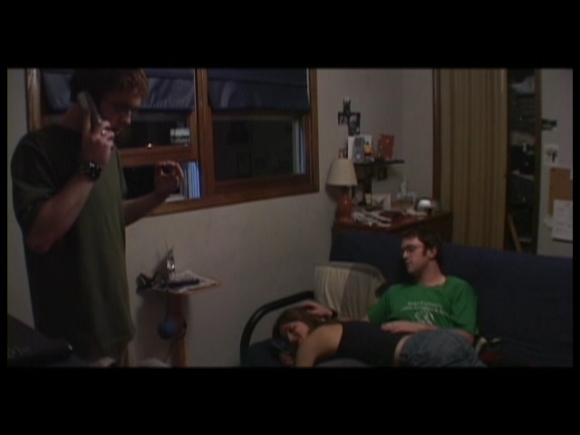 I had been meaning to see Frank V. Ross's movies for years -- I had heard of Quietly on By and Hohokam as far back as 2006, and I knew him as one of Joe Swanberg's regular actors -- when I finally shot him an email asking if I could buy any of his work on DVD. I ended up buying all four of his releases, although his website for the films seems to have disappeared since then. I'm glad I got through to him during that window. The films are wonderful. Like a lot of the "mumblecore" (a term I resent, by the way) from mid-last decade, they're shot on DV, and often feature twenty-somethings during aimless or stagnant periods in their lives. And yet, Ross's films lack neither purpose nor meaning. Refraining from the urban anomie that is often associated with this type of filmmaking, Ross focuses on small town suburbanites, the kind that are rarely represented in films of any type. An intense interest in the behavior and interactions between the characters shines through in each film.

Quirtly on By focuses on Aaron, who lives at home with his younger sister Erin and their mother. A recent breakup with a long-term girlfriend and subsequent breakdown has left him in limbo, unsure of where to go or what to do next. He's neurotic, somewhat paranoid (he suspects a white SUV is following him around, but it's probably all in his head), and his behavior is often erratic and born out of desperation. But he does have friends, and his family is always there as a tether. His mom provides him with some advice ("It's what you do everyday"), and when Aaron repeats it to a friend at a party, it shows that he takes it seriously, cliched though it may be, and that he is trying.

Though Ross's films may be largely improvised, they feel focused and nuanced. His scenes are a balance of looseness and structure. He's also not afraid to break with the realism that digital video conveys and put in an effects shot, for instance, where Aaron imagines a past moment with his ex-girlfriend while talking to her on the phone in the present. It's a really nice touch (especially how it "fades out" of the current scene) in a film full of them, establishing Ross's idiosyncratic yet subtle style. The aforementioned white SUV is another such touch, something I didn't even notice as a thread in the film until my second viewing.

In addition to being a good stylist, Ross proves himself to have a great eye for behavior, and his superb cast of non-actors (I'm assuming) always feel natural. In the film's best scene, or at least its funniest, Aaron is nearly caught spying on a girl he likes, and after running back to his car he calls another girl whose number he'd gotten days before. The ensuing conversation is both pathetic and hilarious. But for all of Aaron's awkward moments, Ross is not making fun of him or looking down on him. Aaron ultimately proves to be likable; the film ends with a touching moment between him and his sister. I took it to be optimistic about his future without being sentimental.

Frank Ross is doing something that is not too far off from Mike Leigh's 1970s BBC work. Perhaps not as brilliant or insightful, but damn near close. It's always refreshing for me to see these types of down-to-Earth films. This isn't simply a slice of life; there's nuance and insight here.

I'll have a piece up soon on his next film, Hohokam.